EU ‘not satisfied’ with Bangladesh progress 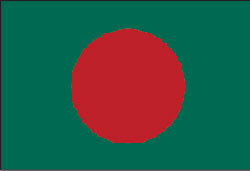 DHAKA - The head of the EU Delegation in Dhaka, Ambassador William Hanna has said he is “not satisfied” with the progress of action taken to ensure that safety and working conditions, and labour rights issues are improved in the Bangladesh readymade garment industry, as well as the slow implementation of compensation for the victims of the Rana Plaza building collapse in Bangladesh, which killed more than 1,100 people, mostly garment workers, last April.